Killing Yellow Jackets is a difficult and dangerous task for the untrained citizen. Nothing strikes fear more than seeing those wasps buzzing around your property, and the fear of a yellow jacket sting is something that we are all familiar with. Here at Pegasus Pest Control we offer the best wasp extermination and wasp nest removal service in Elk Grove, West Sacramento, and Roseville. Before we get into how to get rid of Yellow Jackets we should answer some of the most common questions about these winged terrors.

What Are The Common Types Of Wasp In West Sacramento?

There are two common types of wasps in West Sacramento, the Yellow Jacket, and the Paper Wasp. They cause the most trouble for our community. They are what are known as social wasps. Much like ants and termites, the social wasps form colonies and work in unison towards common goals. They build nests in the spring and their entire social structure is centered on a queen wasp. For this article, we will be focusing on the Yellow Jacket.

What Is A Yellow Jacket?

The Yellow Jacket wasp is one of the most common types of wasps in the northern hemisphere. There are two genera when it comes to the Yellow Jacket, vespula and dolichovespula. The main species found in Sacramento is the Western Yellow Jacket (vespula pensylvanica). Yellow Jackets are more aggressive than bees, hornets, and other wasps.

Yellow Jackets are the picturesque wasp type, sporting the yellow and black striped segments that we most associate with wasps. Their body length is 10-16mm with a thin waist and body long thin wings. They also have a stinger that is hidden at the end of their abdomen until they are provoked.

Where Does A Yellow Jacket Build Nests?

The Western Yellow Jacket will build nests partially underground, in woodpiles or tree barks, and dense vegetation areas. They can also build aerial nests in the eaves of houses, wall voids, attics, electric lamp poles, or secluded tree branches. They build nests that are close to a food source. A Yellow Jacket will never travel more than a few hundred yards from the nest to feed.

How To Find A Yellow Jacket Nest?

Yellow Jackets don’t beat around the bush when it comes to food. They will literally fly in direct straight lines from their nest to a food source. Noticing this pattern is a good method to locate the nest. You can set your own bait but keep a clear distance.

How To Get Rid Of Yellow Jacket Nest?

For your own safety, we would recommend hiring an experienced wasp exterminator. A Yellow Jacket sting can be incredibly painful by itself, but battling an entire swarm of them can be life-threatening, especially to young children. Provoking these aggressive winged terrors by trying to disturb their homes will infuriate them. If you have located the nest by setting your own bait you should mark an area nearby so that the West Sacramento wasp exterminators can take care of the rest. Call us toll-free today on (888) 885-5017 for a free wasp inspection.

What Do Yellow Jackets Eat?

Yellow Jackets will eat insects, fruits, plant nectar, meats, and sugary foods. This is why they are a common sight near garbage cans and picnics. Have you never wondered why they always seem to target your open soda can? One of the common body parts that get stung by a Yellow Jacket is the tongue or inside of the mouth (ouch). Adult Yellow Jackets do not actually eat solid foods but instead, go after drinks. They will bring food back to their young in the nest to devour though.

Why Are Yellow Jackets So Common In Summer?

The majority of the Yellow Jacket population will die when winter arrives. They strive in hot and arid climates, but the Queen Yellow Jacket will be the only one to survive through the winter. That is why they seem to be common during the summer months when we are more likely outside having picnics.

How To Get Rid Of Yellow Jackets

Pegasus Pest Control has plenty of experience in getting rid of Yellow Jackets in your commercial or residential property. Eliminating a Yellow Jacket nest is most easily done in the evening or early morning. Not only are the majority of the Yellow Jackets in the nest at these times, but they have trouble seeing in the dark. This allows better access to the opening and ensures a thorough treatment. We strongly recommend you wear all appropriate safety gear if you are attempting to treat the nest on your own. If the nest is in the ground approach it slowly and apply a slow steady pin stream of liquid control material into the nest opening. Do not use high pressure as this will collapse the entry point and the control material will not reach the nest. If the nest is in a wall void or a tree it is recommended to treat with a control material that is in a dust formulation. Again with your safety gear on the approach the nest slowly (a ladder is often required) and apply a light coating of dust into the entry point. In both cases make the application and leave the area immediately! The Yellow Jackets will be extremely angry and active for several hours after the treatment. If the application was done correctly the Yellow Jackets will be eliminated in about 24 hours.

If you don’t want to take the risk of treating a Yellow Jacket nest by yourself we don’t blame you. Getting rid of Yellow Jackets is a dangerous game and we think it is best to let a professional handle the problem for you. If you have found a nest close by your home or business just give us a call toll-free on (888) 885-5017. You can also submit an online application form. 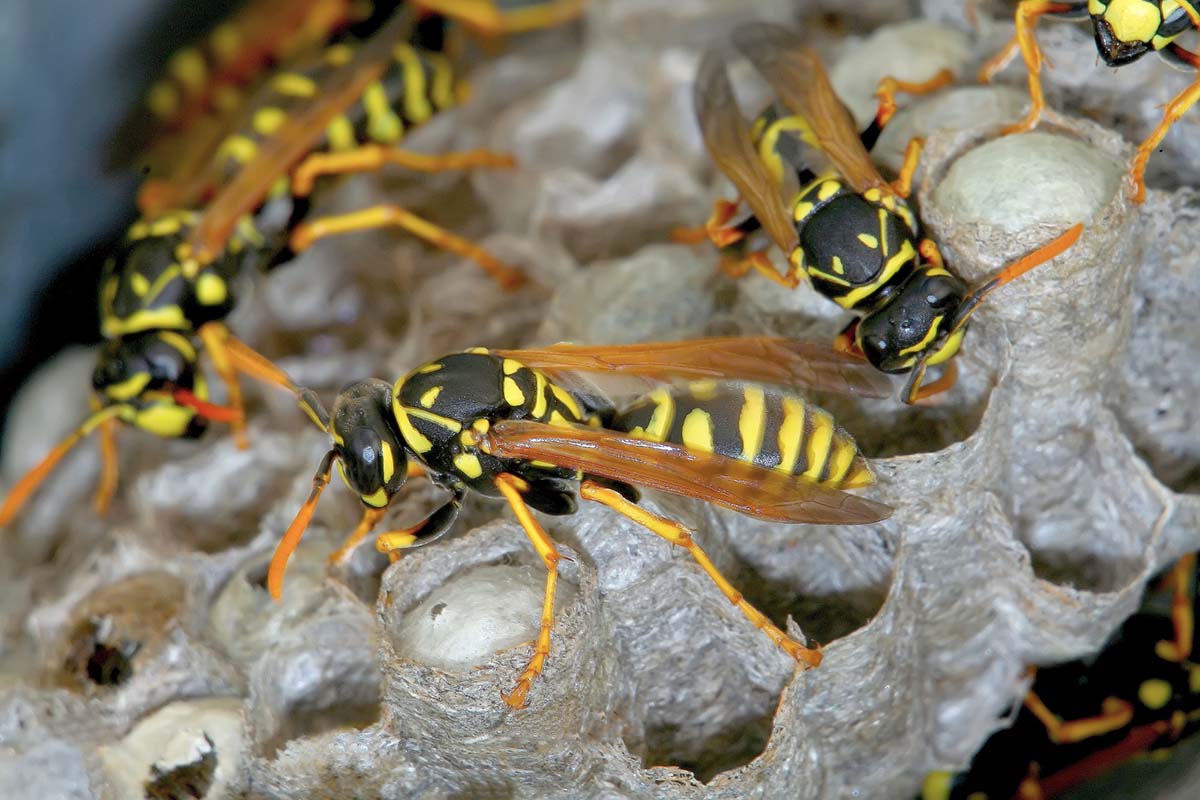 6 Things You Need to Know About Wasp Control in Sacramento